This tiny church in the Border Country is probably the most difficult of all our buildings to find — but the search is worth it.

Walkers will come across the site as they tackle the Marches Way footpath, which starts from the vaingloriously named Arcadia Farm. Do beware of dogs in the area.

After visiting, do remember to close the gate to the church to keep out the inquisitive sheep!

There a nice, slightly strenuous walk of approx. 1.25 miles to Llancillo church from Rowlestone church. It affords great views of Skirrid and the Black Mountains.

Llancillo sounds Welsh but it lies on the English side of what is classic Border country.

Inside St Peter’s, a centuries-old bell is said to be the oldest in Herefordshire.

While we don’t want to keep visitors away from Llancillo church, Herefordshire, getting there is a bit of battle, involving sharp turns, bottomless potholes, cattle grids to rattle your teeth, boorish cattle, watchful sheep and a busy train-track … This area is no stranger to battles. It’s here, along the spellbinding Welsh Marches, that you’ll find the densest concentration of motte-and-bailey castles in England and Wales. These castles were the result of William the Conqueror’s plan to subdue the Welsh by installing Marcher Lords along the border. So, it’s no wonder really that our little church at Llancillo is in the shadow of an ancient castle. The castle at Llancillo was built in the 1090s by Richard Esketot, a tenant of the formidable de Lacys. Now only a mound can be seen. The church itself , which has been alternatively dedicated to St Tyssillio, dates to a similar time, with remodelling in the 14th, 17th and 19th centuries. Inside, the church is rugged and dark, with the luminous focal point of the intense east window, given in memory of Joseph Wheatley, Town Clerk of the City of Cardiff, who lived at Llancillo Hall (an early 17th century mansion half a mile to the south west). The woodwork is especially rich and interesting – much of it recycled: the carved wall-plates in the porch are believed to be part of an old roodscreen; the choir stalls incorporate 17th and 18th-century panelling; the fine wooden pulpit is richly carved with arabesque panels, one of which is dated 1632; another with initials and date ‘I.G.1745’, seems to have been made from various pieces of wood with the back panel being part of a former box-pew. Inside and out, there are monuments to the Scudamore family — the same Scudamores that bought Dore Abbey in the Dissolution of the 1530s and sold off the masonry, and then, in the 1630s had a pang of guilt and restored the building as parish church. If visiting this remote church, why not combine it with a visit to St Peter’s, Rowlestone, with its fine Romanesque carvings by the Herefordshire school. This nearby church (not in our care) is linked with st Peter’s, Llancillo via the Marches Way. And please do sign the visitors’ book — it’s been in continuous use since 1938. 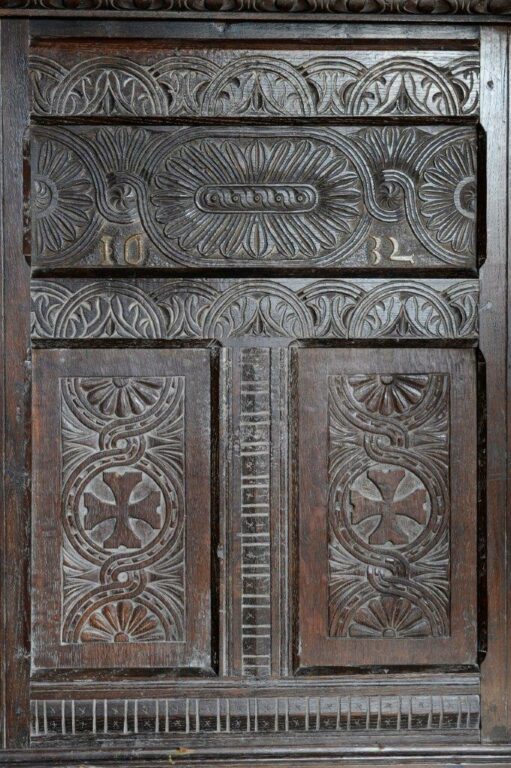 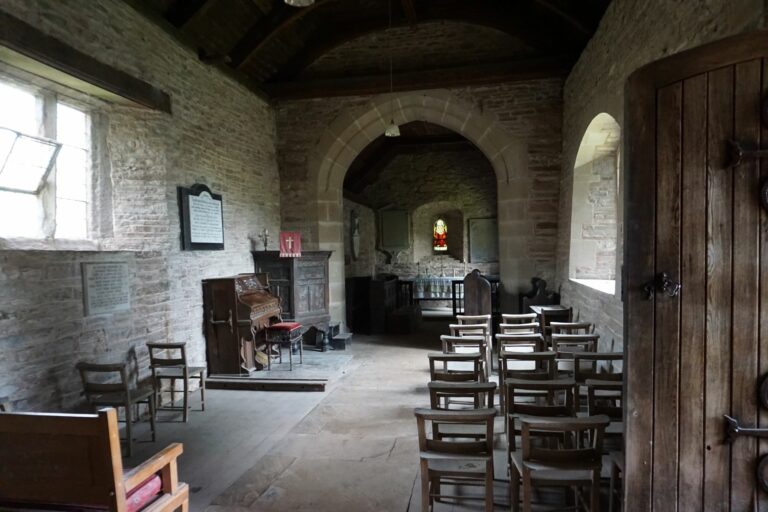 Dating from the 12th century, Urishay chapel is the earliest purpose-built castle chapel in Herefordshire, and it was so very nearly lost forever.
Read more