Deep in the Black Mountains in a large and ancient churchyard, this church is renowned for its 14th century blood-red rood screen and loft.

Remotely situated in the hills of the Brecon Beacon National Park.

Nearby is Llanelieu Court, an enigmatic medieval house which the church originally served.

The sandstone rubble church has clung to the side of the mountain for more than 800 years.

Inside, an oxblood-painted rood screen and loft have survived against the odds.

This church is remotely situated, deep in the Black Mountains (Brecon Beacons National Park) in a large and ancient churchyard. Of 13th century origin, it’s renowned for its huge 14th century rood screen and loft painted red with ox’s blood and peppered with stencilled white roses. In the centre, a cross is picked out in bare wood. It’s the ghostly reminder of the rood – crucifix – that was lost. The panels above have small quatrefoil openings to allow a view from the loft to the high altar to the east.

St Ellyw was a princess martyr of the 5th century. According to legend, she was murdered (by a rejected suiter who refused to accept her vow of chastity) close to Llanelieu. The church dedicated to Ellyw sits in the Cwm Rhyd-Ellywe within an oval, walled churchyard indicative of pre- or early Christian origins … in the churchyard are pillar stones inscribed with simple Celtic-type crosses that could date to Ellyw’s time.

Llanelieu’s loft features in ‘For Valour’ (2015) by best-selling author Andy McNab; his hero Nick Stone writes: “I parked not far from the church at Llanelieu. I’d first spotted it when Trev and I had found our way out [of our hideaway on the western edge of the Black Mountains] and gone back later when I’d started getting excited by medieval history. God no longer paid St Ellyw’s formal visits, even on Sundays … and I wanted to see if the loft was still painted blood red.” It is! 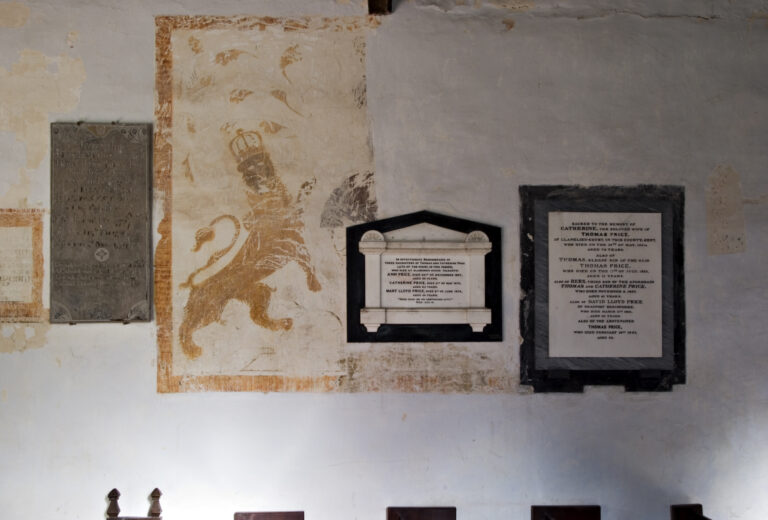 The button below leads to church information on another website.
Coflein listing

Within the little church of St Anno, on the banks of the river Ithon, is one of the great treasures of Welsh craftsmanship.
Read more

St Mary's is renowned for its medieval rood screen and loft and medieval arched-braced roof, as well as its fine 15th century churchyard cross.
Read more