A lead cobweb of cinquefoils and stars, of curves and points, form a delicate rose window.

Meline’s church, dedicated to the obscure saint Dogmael or Dogfael, is an exercise in High Victorian geometry with ‘minimal extraneous detail’. The church was built by Robert Jewell Withers in 1864; Withers (c.1823-94) of 51 Doughty Street, Holborn was a prolific architect and is perhaps best known for his work at St Mary’s, Bourne Street, Belgravia.

The commissioner of this new build was Gothic romanticist Sir Thomas Davies Lloyd of Bronwydd in Ceredigion. Previously, Lloyd had transformed the modest 18th-century house at Bronwydd into a Gothic castle. Sadly, Bronwydd was dismantled, but Meline’s church is almost exactly as Withers left it.

There was certainly an earlier church on the site of the present building. However, the blocked north doorway of the nave, along with the pointed arch and lichen-speckled grotesque faces in the head-stops are now the only clues that this is an ancient place of worship.

The interior is light and airy with mostly clear glass windows. The window tracery in the nave and chancel gives the impression of having been punched through the stone. The varied patterning includes an emblem of the Trinity, and Stars of Bethlehem in the splendid rose window in the west wall.

There is only one stained glass window: the lancet behind the altar, a Crucifixion with SS Mary and John, in vivid colours, by Lavers & Barraud of 1865.

Other furnishings include pine pews with shaped ends, a pulpit with vessica-shaped panels, stalls, communion rails, lectern and a communion table. In the sanctuary, the reredos is of painted ashlar, with inset best quality five-colour tiled panels. The octagonal ashlar font is also by Withers. The vestry, to the north of the chancel, contains a diagonally set fireplace and aumbry.

Unusually, the church is devoid of memorials. However, the walls display other interesting artefacts from the church’s remodel, including a plan of the new church, and a standard ICBS board recording a grant of £75, on condition that the 77 seats ‘at the least’ were free. You may also spot a SPCK Welsh Bible (1858), Book of Common Prayer, and an Illustrated Welsh Bible, with commentary by Owen Jones. Together they are indicative that when the church was rebuilt, Welsh was the language used for public worship. 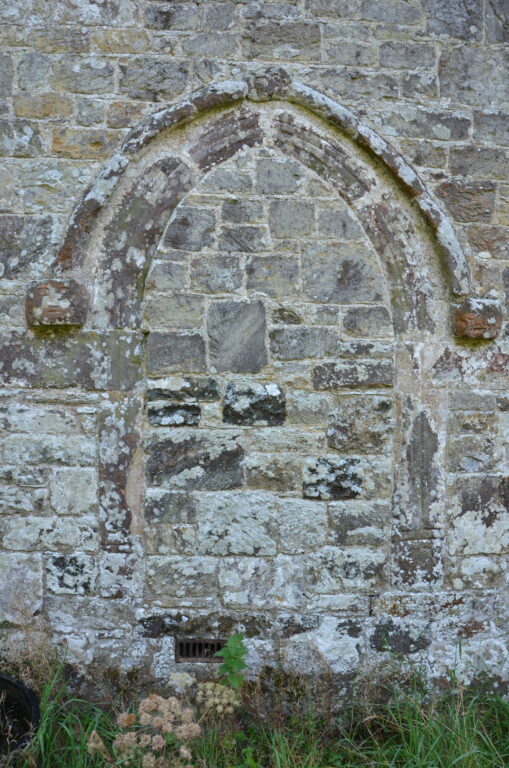 The button below links to more church information on another website.