A secluded medieval church, linked to Rolls Royce, with stained glass by three Victorian makers at their very best

In the Rolls Chapel, the luminous St Michael in golden armour steals the show.

His wings shimmer with peacock feathers, and a blood-red creature — half man, half beast — watches from his feet.

The church has medieval origins, and was once a ‘mother’ church or ‘clas’ church at the centre of a large community, and one of the most important churches in the area.

However, only part of the tower remains from this early building. Built of Old Red Sandstone this porch-tower at the south-west corner tapers gently and is capped with a pyramidal roof (thought to have been installed during the 1875 restoration). Over the porch door is an unglazed three-light, Tudor opening, which illuminates the ringing chamber. The tower contains six bells dating from the 18th and 19th centuries.

The church was restored and lavishly redecorated in 1866 by Messrs Cox & Son, at the expense of John Etherington Rolls of The Hendre. In 1875, with Thomas Henry Wyatt (1807-80) as the architect, the north aisle was added, the chancel extended with a porch and organ chamber added, and the interior lightly remodelled.

St Cadoc’s possesses stained glass by three Victorian makers at their very best. The east window (1875) is by Lavers & Barraud, the chancel windows (1866) are by Heaton, Butler & Bayne, and the west window in the nave (1879) is an early work by C. E. Kempe. Other Kempe work (1884) can be found in the Rolls Chapel. There is also a south nave window (1914) by Powells of Whitefriars.

Within the south porch is an excellent collection of headstones 17th and 18th century headstones. Buried in the churchyard is the Hon. Charles Stewart Rolls, the pioneer aviator, who died 1910 in a flying accident, the first British aircraft fatality. It was this C. S. Rolls who was the joint founder of the Rolls-Royce firm. 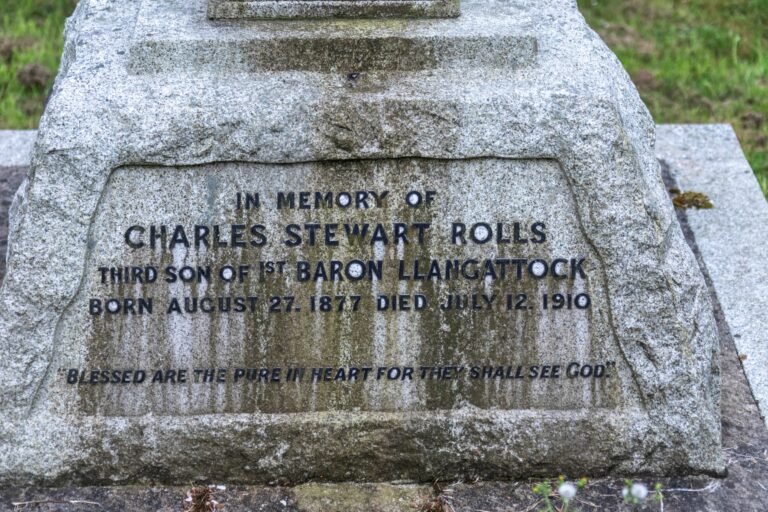 Llangatwg Feibion Afel (The church of St Cadoc of the sons of Afel) is one of Monmouthshire’s most remote churches, but was once one of the most important churches in the area.
Read more