The earliest surviving fabric at St Mary Magdalene's dates from the Norman period - most notably the small round-headed window over the north door.

However, much of what you see today – font, pews and stoup – dates from the 15th century, presumably given in thanks by villagers for deliverance from the Black Death.

This diminutive church is a weather-beaten majesty incorporating embattled parapets, cinquefoil tracery and a rather regal south porch. All of these features hint at grandeur within…

Entering through the south porch, one is met with an extraordinary, floor-to- (almost) ceiling stoup! Dated to the 15th century the shaft is carved with rows of quatrefoils, while acanthus clambers up the canopy. The proportions are so great, that it feels very out of place. Step beyond this to see the font: an octagonal affair from the same century encrusted with cusped panels, heraldry and foliage. The simple moulded pews also date to the 1400s, as do the few fragments of stained glass

One might expect such expense and splendour in a church of a well-endowed village, but this church has just a manor house and six labourers’ cottages for company.

The most common case for the desertion of medieval villages is death, depopulation and harvest failure as a result of the Black Death. Indeed, the population of Caldecote declined heavily during the mid-fourteenth century; no subsidy was paid in 1428 indicating that by then there were less than ten householders in the village.

St Mary Magdalene’s came into our care in 1982. 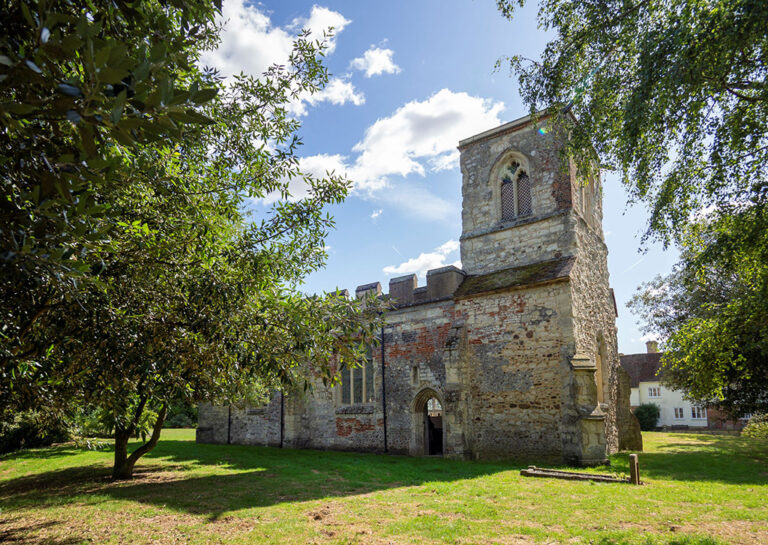 The buttons below lead to more info about this church, and suggest nearby churches you might be interested in

We invite you to explore the walls, floors, and furnishings of Caldecote church with medieval graffiti expert Matthew J. Champion in our new blog.
Read more

The nave of St Denis's, East Hatley was built from field stones c.1217. It was extended in the 1300s, and restored by William Butterfield in 1874.
Read more