The church is located in Matlock Dale, between Matlock and Matlock Bath.

Caution: Can visitors please keep children and dogs away from the edge of the churchyard where there is a long drop to the road. Thank you.

This remarkable private chapel was built by the redoubtable Mrs Louisa Harris.

Her architect, Guy Dawber, assembled a glittering array of artists to realise her dream.

This remarkable private chapel was built by Matlock Dale resident Louisa Harris just over a hundred years ago. Built into a cliff face overlooking the Derwent Valley, a World Heritage Site, the church is also built over a well, which can be picked out on the roadside. A picturesque path wound from Louisa’s grand residence to the door of the chapel.

Mrs Harris appointed architect Sir Guy Dawber — one of the founders of the CPRE and a President of RIBA (1925–7) — to design this personal chapel. Dawber, in turn, chose a glittering array of craftsmen to turn his design into a reality: The barrel vault ceiling and decoration is the work of George Bankart, who specialised in ornamental plasterwork. Brambles and red berries wind over the wall-plate. Vines and roses unfurl across the ceiling and tiny birds flit along the ceiling. Louis Davis, ‘the last of the Pre-Raphaelites’, created the east window around the theme of water. This was just Davis’s second solo commission after leaving the studio of premier Arts & Crafts glass artist, Christopher Whall. Cecil Fabian carved statues to fill niches around the altar. Sadly, these were destroyed by vandals in the 1990s. The other woodwork – the pews and stalls – is simple and elegant. It’s likely to be the work of local house painter and joiner John Cooke of Wirksworth. Right at the back of the chapel is a small brass plaque dedicated to Vida, the beloved dog of the chapel’s founder. 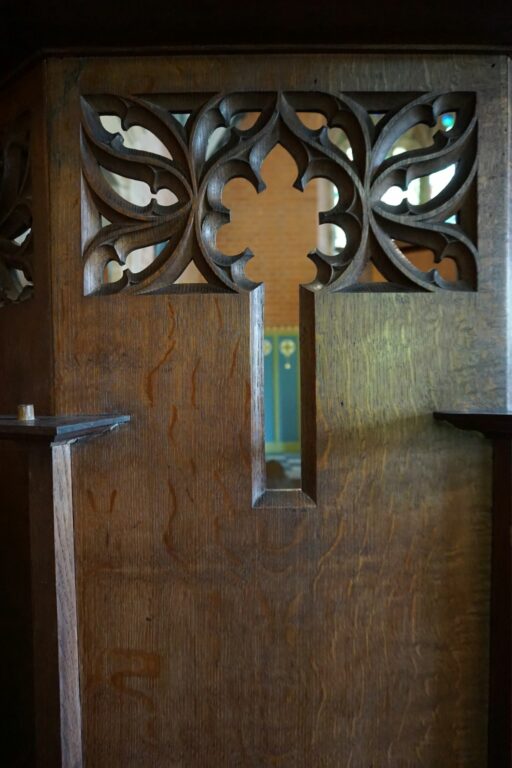 Explore St John the Baptist's with our 3D tour

We take a look at the ancient art of sgraffito, how it was revived in the Victorian era, and how it decorates one of our churches in Wales.
Read more