We are delighted that the new stained-glass window at St Peter’s, Wickham Bishops in Essex has been commended for artistic craftsmanship in the 2021 Maldon Conservation & Design Awards. Huge congratulations to artist, Ben Finn!

In 1850, St Peter’s, Wickham Bishops, Essex found itself on the wrong side of the tracks. Literally.

With the arrival of the railway, the village migrated to the east and a new church was built there. The ancient church fell into disuse and neglect, and victim to vandalism. Out of sight, the church spiralled into decay. The threat of demolition loomed. It seemed like a lost cause.

But this was an important church! Its origins are in the 11th century! It was used by the Bishops of London. St Peter’s was one of our earliest rescues. It has become one of our greatest success stories.

When we found St Peter’s, the windows had been smashed and stripped. As we gradually nursed this church back to life, we put in polycarbonate sheeting as a form of temporary glazing.

Stained-glass artist Ben Finn has used the church nave as his studio since the 1990s. Recently, Ben installed a new east window.

The new east window at St Peter’s, Wickham Bishops depicts Jacob in a rugged landscape of burnt sienna and raw umber, sleeping on the rough earth with a rock for a pillow. He dreams of a ladder that connects earth to heaven, which is full of angels in jewel-coloured robes.

The window was inspired by a passage from the Bible, part of which is inscribed into the bottom panels: “And Jacob awaked out of his sleep and he said, surely the Lord is in this place”.

The artist and window

The subject matter is of personal significance for artist, Ben Finn, partly because he finds the dream imagery of the Bible interesting, but also because this was the subject matter of his very first stained-glass panel, which he designed on the first day of the Diploma in Advanced Stained Glass at Central School of Art in 1988. This was the beginning of his career in stained-glass.

The style of the figures and background take inspiration from Eastern Orthodox iconography. Ben used obscured wispy glass for the background (made by the Wissmach glass manufacturer in the United States) and hand-blown ‘antique’ glass for the figures. The details are painted with glass paint and fired at 650⁰C, the paint making a permanent bond with the glass. The glass is leaded and cemented in the traditional manner and set into the stonework using lime mortar and copper ties to secure the window to the saddle bars. 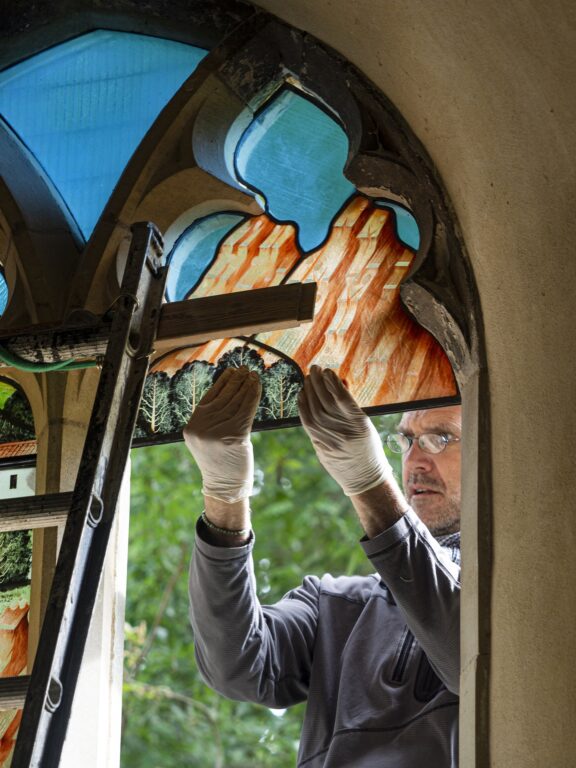 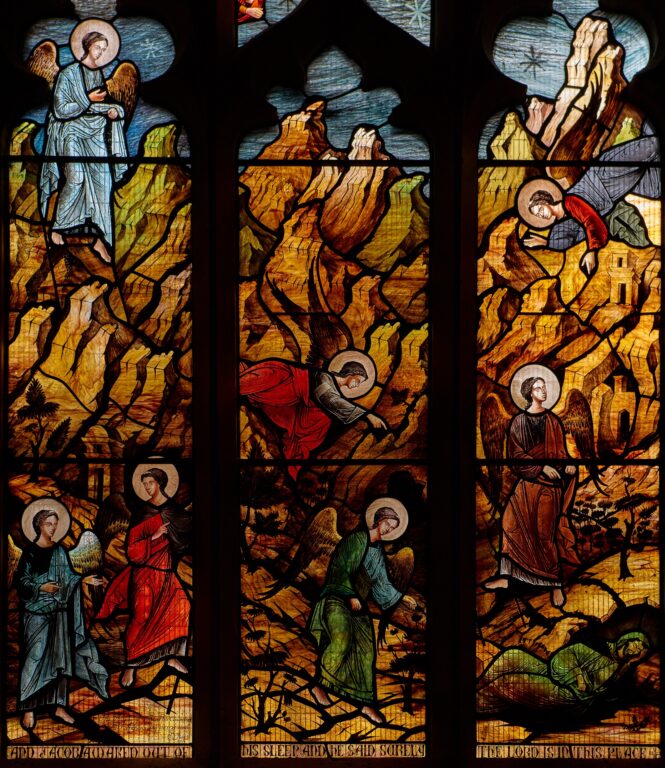 The Maldon Conservation & Design Award judges were “so astonished and delighted by the quality of this new stained-glass window that they decided to invent a one-off category – a ‘commendation for artistic craftsmanship’ – to ensure that it received the accolade it deserves. The window is an exceptional work of art in its own right. It has also positively enhanced the character of building, bringing warm and vibrant colour into the chancel.”

A 12th-century church with four centuries of wall-paintings, and home to a stained-glass artist
Read more

Wonderful medieval church with a timber-framed skirt, in a desolate landscape that inspired The War of the Worlds
Read more