Please do not enter the gallery as the front is very low.

Bertha Kessler and Katherine Hudson were brought together by the horror of war. They needed each other to cope in the aftermath, and stayed together forever.

They founded a Catholic community in the Golden Valley, and built St Mary of the Angels’ as their chapel.

About St Mary of the Angels', Brownshill

Bertha Kessler and Katherine Hudson were members of the First Aid Nursing Auxiliary in the First World War. The shock and stress of their experiences took their toll and by 1920 both women were under psychiatric care.

A few years later having recovered, Bertha and Katherine attended a service by W.E. Orchard, which was transformative… “after a 49 minute address… a curtain was drawn back and we were gazing at an altar ablaze with 40 candles… a procession of choristers entered … amid a cloud of incense”.

The two women converted to Catholicism and devoted their lives to the ministry of spiritual healing. The peace of the English countryside beckoned and they settled on the Stroud Valleys of Gloucestershire, where in 1927, they acquired the Victorian house of Templewood (then called Tanglewood) at Brownshill.

Kessler and Hudson used their own meagre savings to build St Mary of the Angels’ church overlooking the Golden Valley. Despite the modesty of the budget, they went to the best: W.D. Caröe, who was architect to the Ecclesiastical Commissioners and to a number of cathedrals.

By the time Bertha and Katherine came to him he was 73. He died a year after the church’s consecration in 1937. This building mixes styles with a vengeance; in the Pevsner volume Alan Brooks describes it as, “Romanesque with a hint of Baroque”. Inside the view east is dominated by a huge Neo-Norman chancel arch, whilst to the west there is a timber gallery with designs perhaps of a Swedish influence.

Close by the women established a convent and gathered a Catholic community. The bought several properties in the village and devoted themselves to caring for those suffering from post-traumatic stress disorder. They strove “to make each house a home where the members find support, help and consolation in their distress”.

Kessler and Hudson died within three weeks of each other in 1963. They are buried side-by-side under simple crosses in Brownshill churchyard.

Following its closure, the church was transferred to our ownership in 2001. 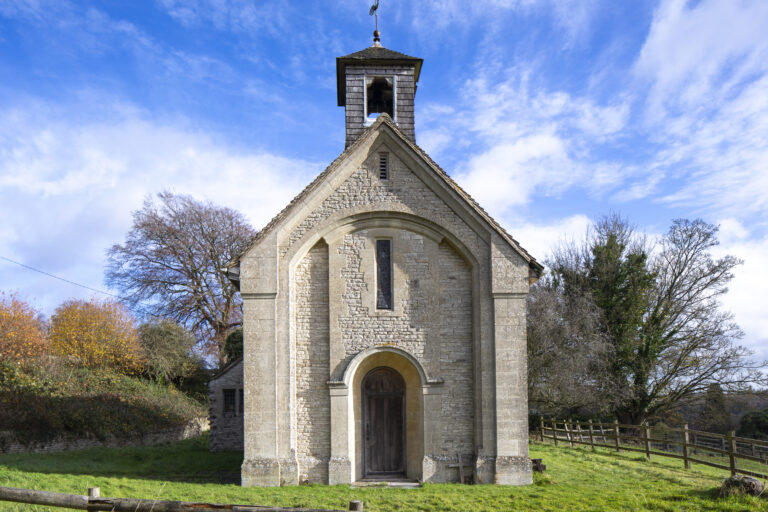 The button below links to church or local information on other websites.