Set near the village of Denver, on the Cambridgeshire borders with Norfolk. The sign off the main road says simply “Byroad”.

St Mary's used to be a wayside church, hugging the edge of the Great Cambridge Road (A10).

When the A10 was diverted on a different alignment, St Mary’s suddenly became a secret, overlooked only by two houses rather than constant traffic. It is somehow poignantly appropriate that the sign off the main road says simply “Byroad”.

St Mary’s ended up with us by an unusual route. Normally our Anglican churches come to us through the Church Commissioners, after a declaration of redundancy – but Fordham church had already been redundant for decades.

Set near the village of Denver, on the Cambridgeshire borders with Norfolk, in a landscape of sluices and fens, St Mary’s was once a wayside church on the historic Great Cambridge Road. After the road was diverted, St Mary’s became isolated and forgotten.

The church is basically 14th century and constructed mostly in the very distinctive ferruginous carrstone or ‘gingerbread’, with undressed surface and in a deep brown which contrasts with the 18th century dressed ashlar and brick on the buttresses. Nearby Downham Market is nicknamed the ‘Gingerbread Town’, due to many of its historic buildings, including the town hall and railway station, being built from carrstone.

Already in the post medieval period, Fordham’s church had proved too large and in 1730 the south aisle was taken down and the arcading infilled with salvaged stonework and the resited traceried windows. The distinctive buttresses were added to take the weight of the roof which is itself mostly an eighteenth century rebuild.

Most of the fittings have been lost but two very curious features remain: two medieval coffin-shaped monumental stones and a much-battered medieval pew with carved ends showing a lion. Both of these items may not be original to the church. 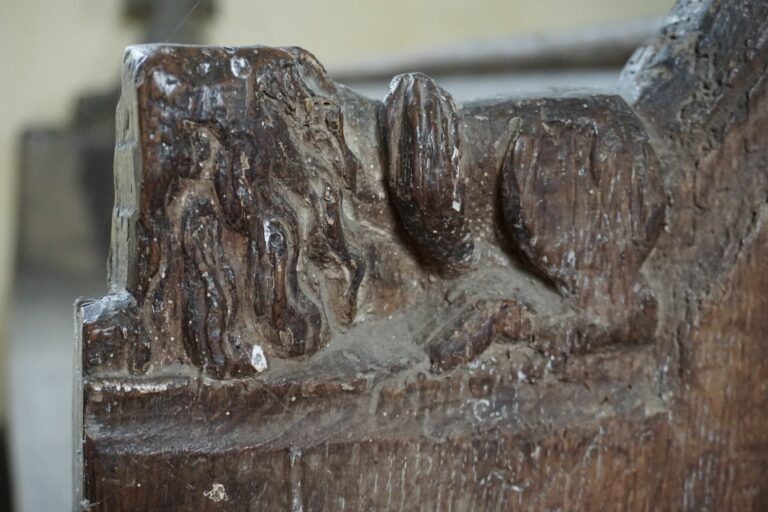 On the altar steps of St Mary’s, Fordham, in Norfolk, there are two remarkable objects that really shouldn’t be there - mysterious medieval gravestones
Read more

An medieval church in the Cambridgeshire Fens, a landmark for hundreds of commuters on the East Coast Mainline
Read more

A distinctive Victorian chequerboard church of limestone and knapped flint with traces of an earlier, medieval building
Read more