And what if all of animated nature
Be but organic Harps diversely fram'd,
That tremble into thought, as o'er them sweeps
Plastic and vast, one intellectual breeze,
At once the Soul of each, and God of all?

In The Eolian Harp, Coleridge explored the idea of inspiration - envisioning all living beings as harps that will tremble with music and ideas when blown by winds of inspiration. In rural Eifionydd, which spans a region from Porthmadoc to Pwllheli, people of all walks of life have been inspired by the landscape, nature, and faith to become some of Wales’s greatest poets and musicians.

At St. Cynhaearn’s church, Ynyscynhaearn in Gwynedd, you can wander in the footsteps of renowned bards, a famous harpist, and other champions of Welsh culture and literature.

David Owen was the son of Owen Humphreys and Gwen Roberts of Ynyscynhaearn. He was known locally as Dafydd y Garreg Wen (David of the White Rock). Y Garreg Wen was the name of the farm where he lived. Dafydd y Garreg Wen died at the early age of 29, and is buried at St. Cynhaearn’s. He was the reputed composer of some popular Welsh airs, such as 'Codiad yr Ehedydd ' ('The rising of the lark') and ‘Difyrrwch gwyr Criccieth ' ('The delight of the men of Criccieth'). Most famously, he is believed to have composed a tune on his deathbed - which was played at his funeral. A century after his death, it was set to lyrics; the folk song, ‘Dafydd y Garreg Wen’, tells of Owen’s request for a harp to be brought to him so he could compose one more song before he died. In 1923, it was the first Welsh language song to be broadcast on the air, performed live from Cardiff by Mostyn Thomas. David Owen’s ledger stone in Ynyscynhaearn churchyard, raised by subscription in the 19th century, bears an englyn by Ellis Owen and a carved image of a harp. 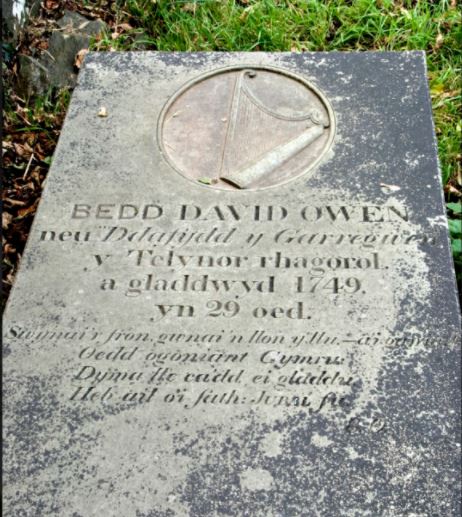 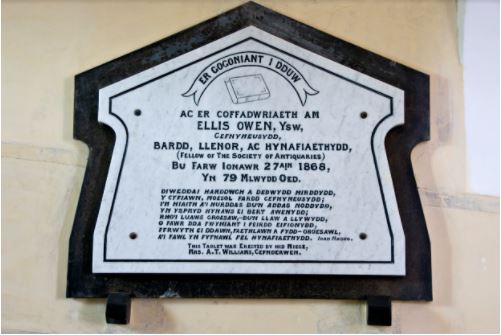 Ellis Owen, a farmer, was born at Cefn-y-meysydd isaf in Ynyscynhaearn, where he lived with his mother and sisters all of his life. Owen was educated at a school in Penmorfa Church, just over a mile from Ynyscynhaearn, which is also in our care. One of his contemporaries at school was another farmer-poet, David Owen (not the harpist), known as 'Dewi Wyn o Eifion'.

Ellis Owen held numerous positions of responsibility within the community, and as a keen local historian, submitted articles to antiquarian magazines. In 1846, Owen established the Eifionydd Literary Society at Cefn-y-meysydd to foster local culture. Young farmers of the district gathered there to discuss literary and educational topics. Owen also served as a secretary and adjudicator at eisteddfods in Wales and England. Ellis Owen became a champion of Dafydd y Garreg Wen, and helped raise funds for a new gravestone for the harpist, to which he added his own englyn. Ellis Owen's poems and essays were published posthumously in a volume entitled Cell Meudwy. A memorial to Ellis Owen can be seen on the wall inside St. Cynhaearn’s and his gravestone is in the churchyard.

Maurice was born in Denbighshire but as a young man, went to London to work with his uncle, Owen Jones. Jones, also from Denbighshire, was a wealthy owner of a skinner business, but alongside his business he found time to promote Welsh literature, becoming one of the most important figures in the literary life of Wales during this period, known as 'Owain Myfyr'. Through a network of influential Welsh businessmen in London, Jones founded Cymdeithas y Gwyneddigion (the Gwyneddigion Society), who met in a tavern to share their love of Welsh writing. In 1789, the society decided to help support small eisteddfodau across North Wales, and according to the National Museum Wales, their efforts became ‘the roots of the modern National Eisteddfod as we know it today’.

Under Owen Jones’ direction, his nephew, Hugh Maurice, transcribed Welsh manuscripts of prose and poetry, and became a vice president of the Gwyneddigion Society. At a meeting of 1805, members reviewed a shortlist of entries for poetry awards and awarded first place to a poem submitted under the name 'Bardd Cwsg'. However, the writer didn't come forward to claim the prize. Only once they had given the top award to their second choice, was it revealed that Bardd Cwsg was Maurice himself!

Hugh Maurice married Elizabeth Jones, daughter of a president of the Gwyneddigion Society, and the Maurice children followed in their parents’ footsteps: Rowland, a tailor, translated a Latin history of Britain; Peter, a Deacon and Oxford University chaplain, was a writer of hymns and works on choral music; and Jane was also a hymn writer. Sadly, another son, Hugh, died at the age of 12 in 1819. He is buried at St. Cynhaearn’s, Ynyscynhaearn. The gravestone inscription expresses his parents’ grief that he would not be able to reach his potential. For eternity, Hugh is remembered as ‘a youth of promising genius.’ 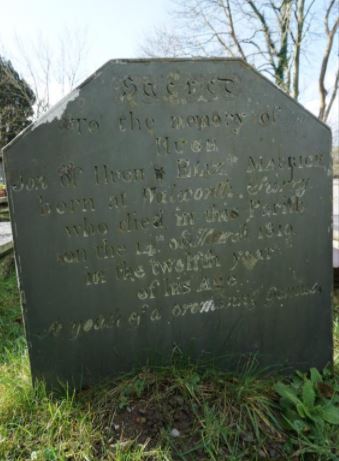 Gravestone of Hugh Maurice (the son of Hugh & Elizabeth Maurice) 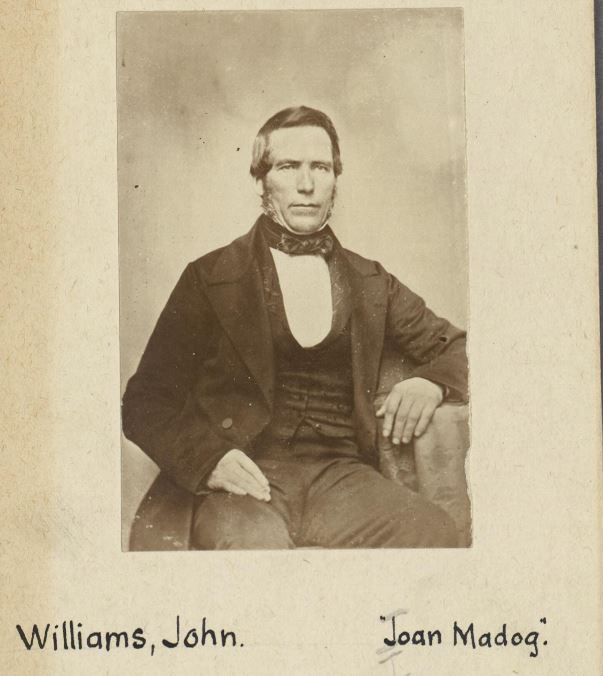 John Williams was a blacksmith who specialised in designing and making implements for ships that were being built at Portmadoc. He was also a wordsmith! Early in life he became interested in poetry, and was 'installed' as a bard, under the name ‘Ioan Madog’, in an eisteddfod held at Bala in 1836. He continued to be a successful competitor in eisteddfodau, including Aberffraw in 1849, Rhuddlan in 1850 and ' Eisteddfod Madog', which took place in Portmadoc in 1851. That festival took place in a 150 foot pavilion, and its east end hall had a striking sign of a goat on the outside. In spite of the remote location, and other concurrent attractions such as the Great Exhibition, people attended from all over the country. It was presided over by the bard Talhaiarn. Talhaiarn’s real name was John Jones, and Jones was the architect of our church at Tremaen in Ceredigion! Williams died 5 May 1878, and was buried next to Ellis Owen in the churchyard of Ynyscynhaearn; both men have pink granite tombstones outside the main north door.

In 1881, after Williams’ death, his poetry was collected and published by fellow poet Thomas Jones. Jones, a lawyer, was a member of the literary circle who gathered at Ellis Owen’s farmhouse, Cefn-y-meysydd, and much of his verse was satirical or ribald. We don’t know if he was connected to St. Cynhaearn’s, but his poetic pseudonym was ‘Cynhaiarn’.

At Ynyscynhearan, in the 18th and 19th centuries, a legendary harpist, poetry-loving farmer, and blacksmith-bard all found creative inspiration and finally came to rest.

A more modern poet has also ‘trembled into thought’ there: the great R.S. Thomas (1913-2000), also an Anglican priest, lived in his later years at Pentrefelin, less than a mile from St. Cynhaearn’s. Thomas only learned Welsh at the age of 30, and said that came too late to write Welsh poetry. However, as John Idris Jones remarked in the Wales Arts Review, Thomas preferred to speak Welsh, and ‘talked of the most out-of-the-way places in Anglesey and Lleyn as if he knew every lane, every corner.’ He also ‘loved the Church. Not its functions, not its paraphernalia, but its presence; the quiet of empty churches was his metier. The long arm of history was his chosen territory; the silence, the quiet persistent reverberations of time.’

R.S. Thomas was laid to rest in nearby St John’s, Porthmadog.

Another famous bard, John Blackwell aka ‘Alun the Poet’ (1797-1840), was Rector of St David’s, Manordeifi, Pembrokeshire, where he is also buried. Read more about this fine nature poet in a blog by Friends Trustee Dr John Morgan Guy. 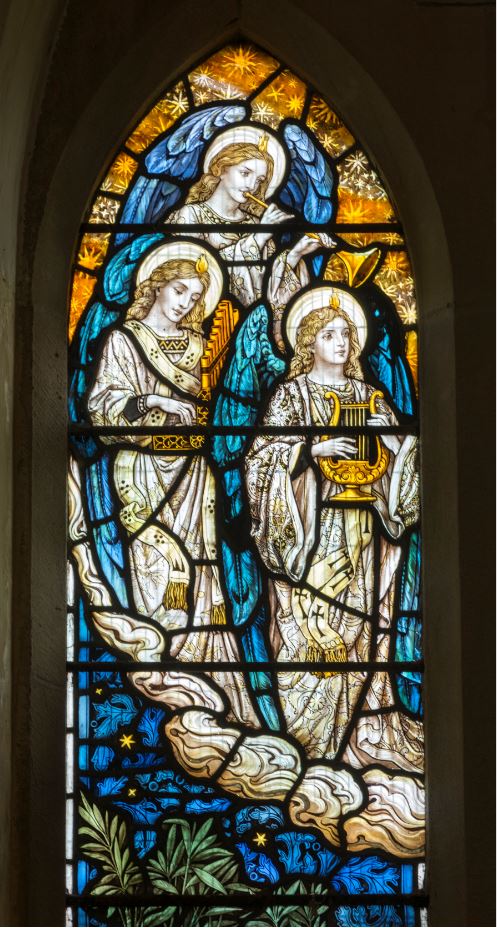 Stained glass window at St. Cynhaearn's depicting angels making the music of the heavens, by Powell & Sons
Information about the Madoc Eistedfodd of 1851 sourced from cynonculture.co.uk
This site uses cookies: Find out more.