As part of our monthly series of blogs on fascinating people connected with our churches, compiled by historian and Friends Trustee Dr John Morgan-Guy, and marking the Visit Wales Year of Discovery, this month we look at Sir John Owen; a 17th century figure of intrigue and power, who is buried at our church at Penmorfa, in Gwynedd.

Clenennau, Caernarfonshire
There is a touch of Alexandre Dumas’ D’Artagnan about Sir John Owen.  He was born in 1600 at Clenennau, in the Caernarfonshire parish of Dolbenmaen.  Built by Sir John about 1662 to replace his birthplace, which had suffered in the Civil War, Clenennau was once one of the most important estates in the county, but sadly little now remains of the house, or of its successor.  John Owen came from a wealthy family; his father had made his fortune as secretary to Queen Elizabeth’s spymaster, Sir Francis Walsingham, and when Sir John inherited Clenennau from his mother in 1626, he became one of the richest men in this part of Wales.

Leading Royalist North-West Wales in the Civil War
Whilst tensions rose between King Charles I and his Parliament – tensions which finally erupted into civil war in 1642 – Owen proved himself a loyal servant of his monarch, probably in some kind of military service, in which he must have distinguished himself, otherwise, as Professor Ronald Hutton remarked,

‘it is hard to see why he should have been singled out in September 1642 to command the foot regiment to be raised in north-west Wales for the king’s service.’

Singled out he was: Owen led from the front and commanded his regiment with distinction, and at the storming of Bristol in July 1643, he was wounded in the face.  Later he was to serve as governor of Reading, and then, as governor of Conway, had responsibility for all the royal forces in north-west Wales.  It was here that he held off the Parliamentary forces until the autumn of 1646 when he was blockaded in the castle, finally surrendering in the November. 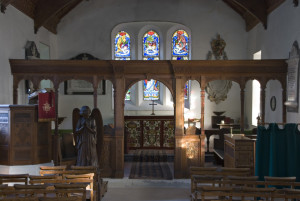 The interior of Penmorfa Church – with John Owen’s memorial prominently sited on the right hand side of East (back) wall of the nave.

A quiet life, however, was not for him. When Civil War erupted in 1648 he was in action again – only to be wounded, dragged from his horse and captured in a small-scale battle at Llandegai.

He was then tried for treason in March 1649, and in the aftermath of the execution of the king, sentenced again to beheading. Extraordinarily, by the narrowest of margins – just 5 votes – parliament quashed the sentence, and with a fine of £1000, Owen went back to his estates.

However, he remained under suspicion – he was a dangerous man, and was twice more imprisoned during Oliver Cromwell’s rule. Undeterred, in 1659, during the faltering Protectorate of Oliver’s ineffective son Richard, John Owen was again foremost in attempting to raise north-west Wales against the government. But the rising failed, his estates were seized, and he himself was a fugitive – saved only from penury and an almost certain death-sentence if captured, by the fall of the republic and the triumphant return of Charles II.

John Owen’s Last Days
Thereafter he lived quietly at Clenennau and when he died in 1666, John Owen was buried in Penmorfa Church, which came into the care of the Friends in 1999.

Visit Penmorfa to marvel at Sir John’s elaborate memorial (pictured left) – an alabaster cartouche, the work of Robert Wynne of Ruthin, erected c.1700 by his granddaughter. In elegant, if somewhat flowery Latin, she records his eventful life (and a translation is provided for visitors to the church).

It is from this memorial, and from his own papers, which he carefully preserved, that we know what we do about ‘this outstanding man’ – a Welsh Musketeer!