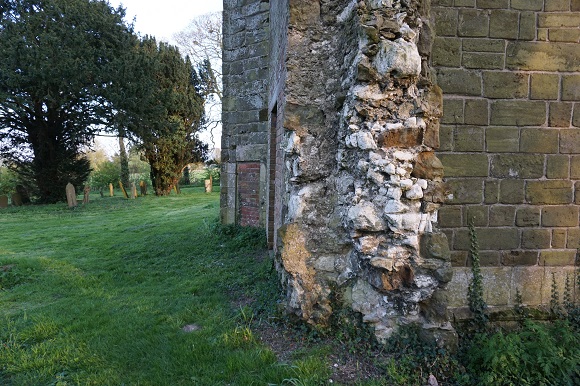 Church-moving is rare and the residual west tower of St Peter's is all that remains of just such an exercise carried out in 1877. Partly because it was felt to be in the wrong position, but also because it had started to move (the tower is still on a definite lean), the architect James Fowler resited the bones of the medieval church from its original position in Charlesgate Road to North End Lane.

We took ownership of the tower in 1976 after being called in by the local farmer, Mark Stubbs, who fought hard to prevent its demolition and left a sum of money for its maintenance.

The tower that survives dates from the 15th century, is listed Grade I and rather grand, although not all the stone used was of the quality of the limestone ashlar in which the best masonry is cut. The coursed greenstone fared less well and we had to carry out some replacement to prevent serious dilapidation.

Mr Stubbs died in 1977 and a plaque commemorates his connection with the church on the north (rebuilt) wall.

The surrounding countryside is relentlessly flat, set in the 'Marsh of Lincolnshire' and prone to subsidence.  Linear settlements and isolated farmsteads co-exist with important medieval churches; reflecting the long-lost prosperity of the area. Today however the area is rich in wildlife, and visible from the church is 'Theddlethorpe Dunes' a designated National Nature Reserve (NNR) managed by Lincolnshire Wildlife Trust. The Reserve is characterised by tidal sand and mudflats, salt and freshwater marshes and sand dunes.Read more about Theddlethorpe here.