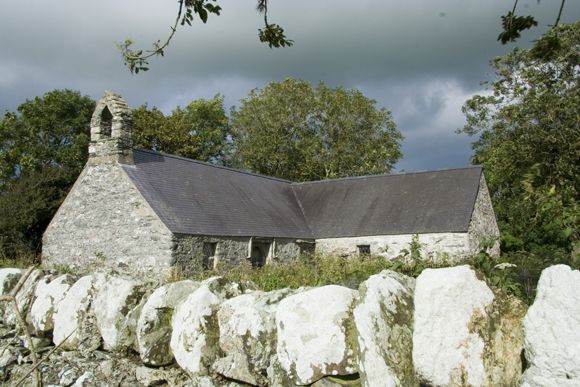 The old church of Llantrisant on Anglesey, now accessible only on foot, was supplanted by a new Victorian church a mile to the east in 1899. It struggled on, but after falling into serious disrepair became one of the first Welsh vestings with the Friends in 1978.

The church is mentioned in the Valuation of Norwich of 1254 as the Ecclesia de Llansann. The present building dates from the 14th century, the south chapel, with its distinctive L-shaped form, being added in the 17th century. The oldest item of church furniture is the font, from the late 12th or early 13th century and English in origin, being rescued from the medieval church at Grove in Buckinghamshire (converted to a house some 40 years ago). There are also two highly sophisticated Baroque monuments, of 1669 and 1670 - so unexpected in a rustic setting.

The comparatively small churchyard full of tombs is surrounded by a boundary wall so high that it almost feels defensive. Maybe it is the sense of mystery that makes this one of the most remote but at the same time one of the most visited of all our churches, as people enjoying the adjacent footpath are tempted to penetrate what feels like a secret garden.