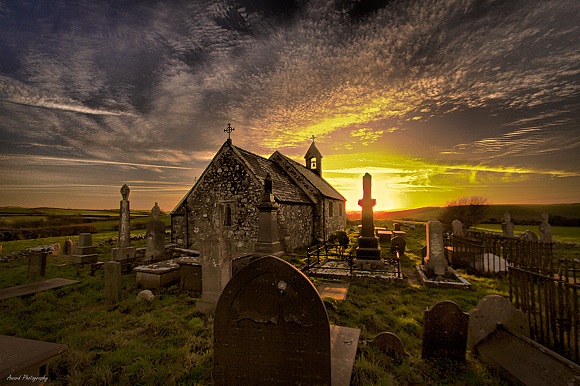 St Peulan's is medieval in origin, and stands in isolation at the end of its raised, grassed causeway, which turns off the road signposted to Dolbaen.

The church is said to have been founded by St Peulan himself in the 6th century - but no fabric from this period appears to survive.

While multiple centuries have left their mark on this church, perhaps none so much as the 1600s. One thousand years after St Peulan’s foundation, people continued to worship on this mound. Ledger0-stones and grave-markers from this period are built into the church as steps and thresholds. Recalling the days of pew rents, one of the chancel stalls declares, “The seate of William Bold of Treyrddol Esquir 1664”.

Dated stones from this time are even built into lichen spattered churchyard wall. In particular, look out for the gravestone used as a step in the stile over the wall.

The chief glory of St Peulan's is what is now the font. Tucked behind the pews at the west end, it dates from the first half of the 11th century and is almost certainly the product of the same workshop as the fonts at Heneglwys and Llaniestyn and one of the great Celtic crosses now in Penmon Priory.

Peter Lord suggests it began life as an altar and that if so "as an altar of the pre-Norman period it is a unique survivor in Wales, and, indeed, in Britain." (from Medieval Vision: The Visual Culture of Wales, University of Wales Press, 2003)

St Peulan's was vested in our care in 2004, after it had been declared redundant.