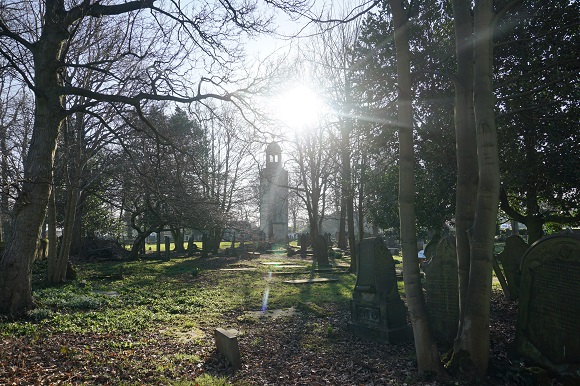 Lightcliffe church is the final resting place of Ann Walker - companion of Anne Lister, of the BBC Gentleman Jack fame.  The green velvet-lined pew they had installed has long gone, but the tower and burial place remain to mark this important spot.   Find out more about her connection to the church, and the campaign to raise a memorial to Ann Walker.

Erected in 1775, Lightcliffe Old St Matthew was a Classical preaching box, replaced by a new church built only a few hundred yards away in the late 19th century. The church was then used as a mortuary chapel, but following serious storm damage in the 1960's it fell into decay, suffering from vandalism and theft.

The fate of the church then became a test case for the newly passed Pastoral Measure of 1969 under which decisions over the fate of disused Anglican churches were systematised for the first time. The Bishop of Wakefield pressed for total demolition in order to remove the danger. Ivor Bulmer-Thomas, appointed Chairman of the Redundant Churches Fund set up as a result of the Measure, fought hard at first for the whole building and latterly for the tower alone.

The eventual decision, arrived at after much procrastination and some acrimony, was that the tower would be passed for preservation intact to the Friends of Friendless Churches, which Ivor had founded in 1957. The body of the church was demolished at the expense of the Diocese, but the cost of repairing the tower and making good its newly-exposed eastern elevation and that of the flank where the lean-to vestry used to sit was met by the Friends. As this was the first ever vesting with the Friends in the newly established Friendless Churches Trust Ltd (alongside Milland Church, also known as Tuxlith Chapel on the Hampshire/Sussex border), the financial challenge was acute. The money for this rescue exercise was found and the tower was passed formally to the Friends on a ninety-nine year lease on 1st January 1974. The repairs, carried out by Marshalls of Elland, were first supervised by Dr John Harvey, then based in York and far better known as a great scholar of Gothic architecture. He knew Ivor well from years of service on the Council of the Ancient Monuments Society of which Ivor was then Chairman, but even so his directly architectural career had been limited previously to that of consultant architect to Winchester College. In the last stages of the contract he was succeeded by Dr Tom Marsden of Manchester U

niversity. A further programme of repairs, particularly to the cupola, was carried out in 1990, the latter costing £5,800.

Here are the hardworking Friends of Lightcliffe St Matthew's Churchyard (near Halifax, Yorkshire) who have just launched their own website - complete with a searchable database of burials - all 11,000 of them! We're thrilled to see that the vast, once overgrown, churchyard which surrounds the tower is now cared for so thoughtfully.

Sice 2017 there has been a poet-in-residence at St Matthew's Churchyard - read more here!

For up-to-date news on all the actvities of the Local Friends visit the website of the Friends of Lightcliffe St Matthew.