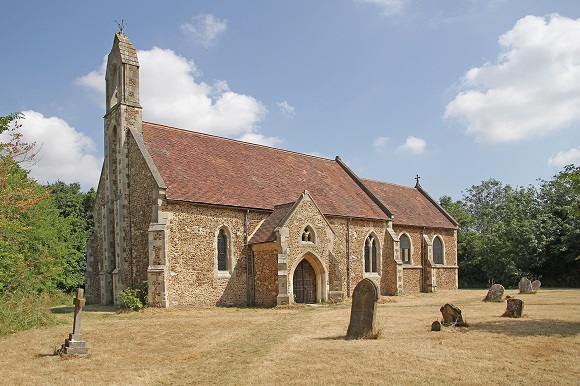 St Denis’s is a Grade II* listed church. The earliest fabric dates to 1217, but much of the surviving medieval elements are from the 14th-century. Most of extant work is that of 19th-century architect William Butterfield, showing his High Victorian fondness for polychromatic stone and brickwork.

Gradually, the church fell in to disrepair and as the cost of repairs couldn’t be met, St. Denis’s was abandoned in 1961 in favour of a new church that was partially furnished with fittings from the old building. St Denis’s retains the 19th-century font, and ghosts of the pulpit and reredos.

South Cambridgeshire District Council took the church into ownership in 1985. By this point, the building had been stripped – even the floor-boards had gone! The Council preserved the site as a nature reserve and it is currently home to cave spiders, bats and great crested newts.

A £130,000 package of restoration work from 2005-06 saw the walls and roof repaired. Funded by South Cambridgeshire District Council, English Heritage and Hatley Parish Council, the work left the church wind and watertight, but not safe to use on a regular basis.

In late 2016 the building was transferred to the Friends of Friendless Churches. The transfer came with a £60,000 grant from the Council to fund work to restore the church to usable condition.

The first phase of work sought to make the church weather-proof and safe for public access. This has now been completed.

To make the building water-tight, the many slipped, broken and missing roof-tiles were replaced or re-fixed, and cracks and open joints in masonry (particularly to the porch and buttresses) were re-pointed in lime mortar.

The most dramatic works are undoubtedly to the floors and windows.

New glazing has been installed in the nave windows and black-powder coated metal guards installed on the outside.

In the nave, tongue and groove floor-boards have been laid with three inspection hatches, so that the medieval timbers beneath can be seen. The central walkway to the nave has been and re-tiled with some salvaged, some new tiles.

In the choir-stalls area of the chancel, an entire new floor structure has been created and new floor-boards installed. The York stone edging to tiled walkway and the tiled chancel step have both been repaired and restored.

We still need to repair internal wall and ceiling finishes, install glazing to the chancel windows and repair the reredos.

A lot has been done, but much more remains to be done!