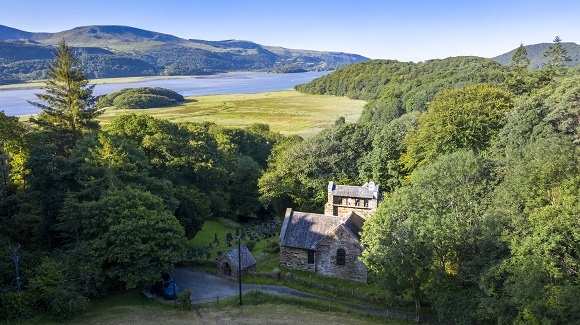 A Victorian church of extraordinary individuality and importance

St Philip’s, Caerdeon is hard to define. It has been described as rustic Mediterranean, Alpine, of French Basque influence or like an Italian farm building.

In 1863, The Ecclesiologist wasn’t complimentary about it, describing it as “something between a large lodge gate and a lady's rustic dairy”. Indeed, neither was The Ecclesiologist was very complimentary about The Revd. John Louis Petit (1801-68) - the architect of St Philip’s. In 1863, that eminent publication labelled Petit “a clever amateur”. The Ecclesiologist’s disdain for Petit presumably stemmed from his openness to architectural ideas from a range of sources, collected in his book Remarks on Church Architecture (1841), which put him at odds with advocates of strict Gothic Revival principles.

Petit, one of the leading architectural writers of his age, was one of the few who resisted the ‘copy Gothic’ that was so fashionable in the 19th century. In addition to architecture, he was an accomplished topographical watercolourist. The great success of St Philip’s is how, despite its continental influences, it is in harmony with its North Wales landscape; Petit achieved this through the use of local materials and building traditions. Even The Ecclesiologist had to admit that it has “picturesque appropriateness”.

Petit was keenly aware of the relationship between landscape and architecture, and in Remarks on Church Architecture wrote, “In a flat country the principal churches are lofty in their proportions, and have high steeples, which catch the eye at a considerable distance . . . . In rocky and romantic situations a less pretending edifice is preferable; many of the Welsh churches, from their extreme simplicity, are the best models that could be chosen… I do not remember a single instance in which the church did not add materially to the beauty of the landscape”.

The rusty, rubble-slate construction includes a lean-to loggia with stone benches and pairs of round-headed, Romanesque windows and a unique bellcote-cum-chimney, which holds three bells that are rung by large wheel found in a shelter on the north side of the church. For many years, Bill Tilman, who climbed Everest in 1938, rang these tinkling bells at St Philip’s.

Inside, St Philip’s is quite simple. The walls are white-washed and bare. The pews are plain. Decoration has a Byzantine feel and is saved for the sanctuary. The east window, a Crucifixion by Kempe, was inserted in 1892 in memory of Samuel Holland.

Another extraordinary element to St Philip’s is that over the course of fourteen months, Petit painted the construction of the church. So, within the archive of the National Library of Wales, we have a full archive of watercolours charting the development of the church.

St Philip's is Petit’s only known building. In 2018, Cadw upgraded its status to Grade I. The reasoning included that St Philip’s has “special architectural interest as a highly unusual and distinctive church for its period, boldly original in its style and relationship with its landscape… It gives clear expression to [the architect’s] views, which provided a counterweight to the prevailing orthodoxies of the Gothic Revival. The building is also of historic interest for its controversial role in Welsh ecclesiastical history.”

Indeed, in the 1860s, St Philip’s rocked the Anglican church. The Bishop of Bangor issued a licence stating that, as the church was a private chapel for The Revd. W. E. Jelf, Censor of Christ College, Oxford, services and sermons should be delivered only in the English language. This was challenged by the Rector of Llanaber (in whose parish it lay), as there was a legal obligation to hold services in Welsh speaking areas. The rector brought Jelf before the Court of Arches and was successful, but the situation worsened when the Bishop of Bangor introduced a bill into the House of Lords to enable services to be conducted in English in Welsh speaking areas provided certain conditions were met. This became the English Services in Wales Act of 1863, passed as a direct result of the building of this church.