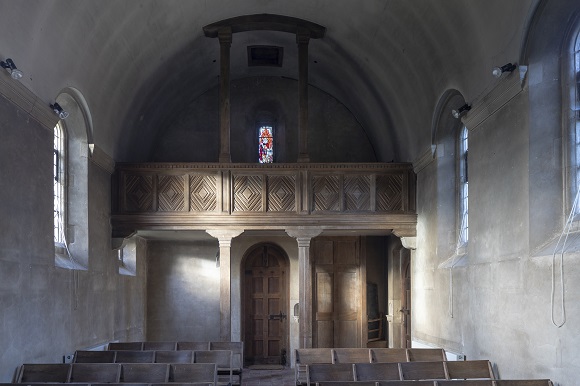 St Mary of the Angels

St Mary of the Angels was passed to us in 2011 and is both our most modern vesting and our first Roman Catholic building. It only just qualifies for the former as our church at Llandeloy in Pembrokeshire is a late flourishing of the Arts and Crafts Movement of 1928.

St Mary's was started in 1930 and brought together a leading architect then in the Indian Summer of a long career, W.D.Caroe, and as client, two strong minded ladies.

Bertha Kessler and Katherine Hudson had been members of the First Aid Nursing Auxiliary in the Great War. The strain of war took its toll and by 1920 both were under psychiatric care. A few years later, having converted to Catholicism, they decided to devote their lives to the ministry of spiritual healing. The peace of the English countryside beckoned in particular the Stroud Valleys of Gloucestershire where in 1927 they acquired the Victorian house of Templewood (then called Tanglewood) at Brownshill.

They were determined that their endeavour should be marked by a chapel and each gave £1,000 from their own purse to realise it. Despite the modesty of the budget, they went to the best. W.D. Caroe was architect to the Ecclesiastical Commissioners and to a number of cathedrals. The former headquarters of the Church Commissioners at No 1 Millbank just beyond the Palace of Westminster is his as are scores of restorations and new churches. The sublime St Hilda's at Hartlepool shows him at the peak of his achievement.

By the time the ladies came to him he was 73 and was dead a year after its consecration in 1937. Despite this it displays the playfulness that more often comes to the young. It mixes styles with a vengeance "Romanesque with a hint of Baroque" says Alan Brooks in the Pevsner volume. Inside the view east is dominated by a huge Norman chancel arch whilst to the west there is a gallery with Swedish echoes, approached up an unusual stair where the treads are laid diagonally. All the windows are by Douglas Strachan (1875-1950), described as "the greatest Scottish stained glass artist" by that great authority, Peter Cormack.

The chapel is idyllically sited overlooking the Golden Valley, the site made more poignant by the run of identically sized memorial crosses which mark the graves of Bertha and Katherine and a number of local Catholic priests, monks and laymen and women.

We own St Mary's because of the determination of the villagers to purchase the building from the diocese to save it from loss and present it to us for conservation in perpetuity.

The chapel is idyllically sited overlooking the Golden Valley.