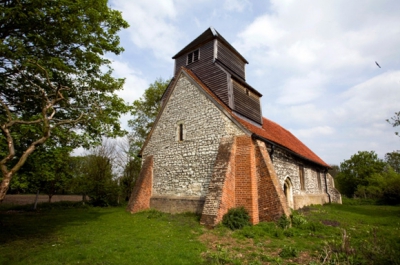 St Mary's, Boveney, nestling on the banks of the Thames, almost within sight of Eton College but a world away in a small remote hamlet, was saved by the Friends in June 1983.

The building is listed Grade I despite its low-key exterior. What tips it into that highest of all listing categories is the remarkable vernacular interior with 18th and 19th Century fittings, its romantic location adjacent to the Thames and its very early origins in the 12th century.

The church was built to serve the bargemen, or bargees as they were called, who plied their trade on the river, although the quay immediately adjacent is long lost. Outside you will notice the little slivers of flint pressed into the mortar coursing lines - this is a partly decorative, partly functional technique known as galletting.

In 2009 we completed a £200,000 contract to conserve the weather-boarded and timber-framed 15th century tower where the degree of instability had proved alarming. We were very fortunate that English Heritage gave a 70% grant towards the total cost, and very grateful too for donations from Sir John Smith and the Francis Coales Charitable Foundation.

Eton College, who historically held the living of the church, were also very generous in dedicating the proceeds of their annual 'Concert for the Choir' to the repair campaign and we remain very grateful to them, to the boys of the choir, the orchestra and local people who supported the concert.