Bombers over Brownshill: The explosive history of St Mary of the Angels

Dr Alec Hamilton is an Arts & Crafts expert and former Trustee of the Friends. His book, Arts & Crafts Churches, will be published later this year.

On 14 March 1946 an RAF Lancaster bomber, KB-705, took off from Aston Down aerodrome, near Stroud, Gloucestershire, on a training flight. The pilot was Squadron Leader Reg Heber Thomas; the flight engineer, Flight Sergeant Ronald Lester Gray.

As it climbed away from the runway, all four engines failed – totally and simultaneously. The pilot tried to make an emergency landing, but the aircraft stalled. It plunged towards the ground, and crashed into a large Victorian house on the hill opposite the aerodrome. The house burst into flames with a tremendous explosion. Both members of the crew were killed instantly. The house was Templewood, and its roof and upper storey were utterly destroyed. Templewood stood just a few yards from the church of St Mary of the Angels, Brownshill – now in the care of the Friends – which was totally unscathed.

The rather sombre analysis of the accident was this: ‘The crew did not prepare the flight properly, and did not follow the pre-departure checklist.’ The power switches were set incorrectly in the OFF position, so, as the joystick was pulled back, all four engines stopped.

St Mary of the Angels, Brownshill (W D Caröe, 1937) started a good deal more quietly than this. But its history is nonetheless eccentric.

Bertha Kessler and Katherine (Katie) Hudson served together as nurses in the Great War. As a result, they both suffered from what would now be called Post-Traumatic Stress Disorder.

Miss Hudson was a church-goer. She attended the Congregational services at the King’s Weigh House chapel in Westminster, led by Dr W E Orchard. His was an idiosyncratic sort of service: ‘After a 40-minute evangelical address by a Baptist minister, a curtain was drawn back, and in three minutes all traces of a Congregational church vanished, and we were gazing at a Catholic altar ablaze with 40 candles. … A procession of choristers entered from the sanctuary, the rear being brought up by Dr Orchard in a splendid garment for the service of ‘Benediction’.’

Dr Orchard had chutzpah and charisma. He persuaded the two women to go on retreat to Switzerland for five months, and adopt the discipline of Father Ignatius Loyola! Orchard believed that psychiatry without faith was not adequate for the treatment of mental illness. The ladies, who had both had psychiatric treatment, agreed. They decided to dedicate themselves to spiritual healing, combining psychiatric nursing with spiritual guidance. They took their first patient in 1923 – only female patients were taken at first. In 1927 they bought a house in the secluded tranquillity of Stroud’s Golden Valley, at Brownshill. Tanglewood was a rambling Victorian mansion (1891) in large grounds with commanding valley views: an ideal retreat. They renamed it Templewood Home of Rest.

The ladies’ spiritual questing brought them in contact with local priests: Fr Vincent McNabb of Woodchester Priory, and Fr Philip Darley, chaplain to the Dominican community of St Rose’s of Lima in Stroud. In 1934 Darley received both women into the Catholic church.

In 1936, they received their first male patient – a Benedictine priest, and two Dominicans the next year. There was pressure to have a priest on hand to serve the growing community: in 1938 Fr Darley became Templewood’s chaplain. The Bishop of Clifton felt they should have their own chapel. (In 1935 a patient at Templewood had had a vision of a church built in the next field, just a few yards east of the house – which is precisely where it was built.)

In 1937 they appointed W D Caröe as architect – it was to be his last church. He was old and ill, but still Architect to the Church Commissioners – how very odd to get the top Anglican architect to build a tiny out-of-the-way Roman Catholic church for nurses (who would become nuns). 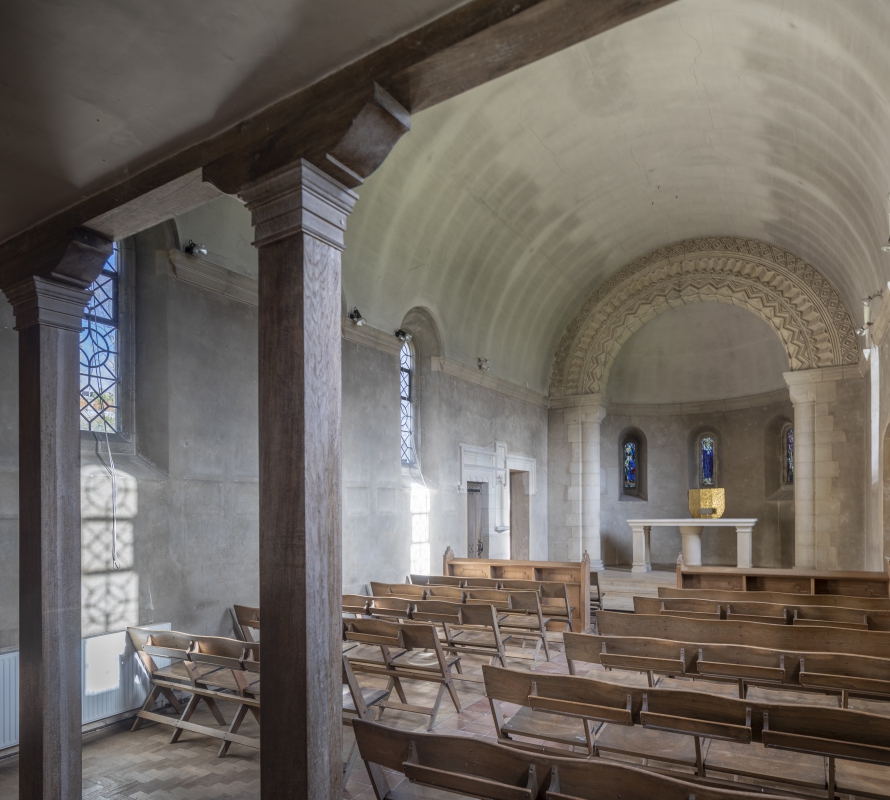 That year eighteen male patients were received, and twelve women. More houses were acquired to provide more accommodation. In 1943, the flamboyant Dr Orchard, who had meantime also gone over from the Baptists to Rome, came to Brownshill, and seems to have taken over from Fr Darley as chaplain.

When the Lancaster bomber crashed on Templewood, one lay brother, Brother John, was badly burned. However, Fr Darley, the spritely 64-year-old retired chaplain, shinned down a drainpipe and escaped without a scratch.

Remains of the wrecked plane, with the ruined house in the background.