Early history of The Friends

The Friends of Friendless Churches was formed in 1957 by Welshman, Ivor Bulmer-Thomas. He sought to:

secure the preservation of churches and chapels, or of any part thereof, in the United Kingdom, whether belonging to or formerly used by the Church of England or by any other religious body … for public access and the benefit of the nation.Ivor Bulmer-Thomas

The Friends of Friendless Churches was established at a meeting held on 3 July 1957 in Committee Room 13 of the House of Commons.

Initially, the Friends pursued their objectives by campaigning and grant-aiding. From the outset, the Committee fought for a formal church-and-state-led structure to protect important places of worship.

From 1960, FoFC gave evidence at the Bridges Commission, which led to an investigation by Lord Ilford. This led to the creation of the Pastoral Measure (1968, revised 1983) which provided the perpetual protection for important places of worship that we had so desperately fought for. The protection came in the form of the Redundant Churches Fund (RCF), now the Churches Conservation Trust.

Ivor was the first Chairman of this organisation and many of the churches hitherto cared for by FoFC were adopted by this new body.

As a result, in 1972 the Friends amended their Constitution and established a company, The Friendless Churches Trust Ltd, enabling them to take direct ownership of buildings, under the Pastoral Measure, by freehold or by lease, which they felt were too important to be demolished, converted or left to decay. The residual tower at Lightcliffe was the first vesting with the Friends. 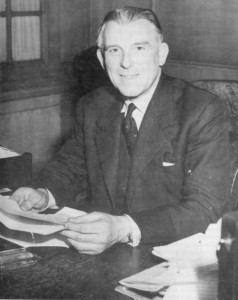 Ivor Bulmer-Thomas (30 November 1905 – 7 October 1993) was a Welsh journalist, politician, athlete and writer.
He was man of prodigious energy and gifts – he worked at The Times, News Chronicle and Daily Telegraph, he had a successful career with all three major political parties and narrowly missed being chosen for the 1928 Olympics. He could speak six languages and authored seven books on subjects ranging from the history of Greek mathematics to a biography of Lord Gladstone.

When it came to historic churches, Ivor was resolute and sure of his purpose. He fought to have St Andrew’s-by-the-Wardrobe in the City of London rebuilt following severe bomb damage in the Second World War.

Ivor persuaded the Church of England to introduce the Quinquennial Inspection Measure, stipulating that each church should be thoroughly inspected every five years. This modest Measure has prevented many a repair crisis.