The Friends are delighted to grant aid a new sculpture in Winchester Cathedral honouring the late composer Sir John Tavener. The work, in glass and stone, by Angela Connor FRBS, symbolises the spirit that flows through the walls of the cathedral and is interpreted by a carved stone plaque by the letter carver and designer, Tom Perkins.

Unveiled on 11th November 2016, the sculpture was the initiative of Sir John’s widow, Lady Maryanna Tavener. Our contribution of £6,000 (through the Cottam Will Trust) enabled the fundraising target to be met. 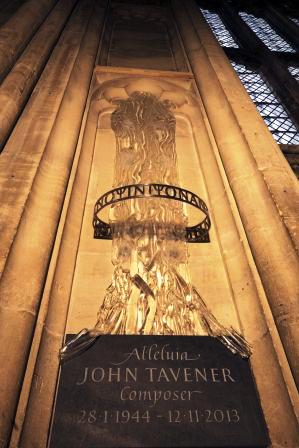 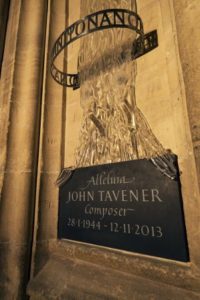 Sir John Tavener (1944-2013), one of the most spiritual of all modern composers, was brought up in the Scottish Presbyterian church, became interested in the Catholic faith but settled on the Orthodox in 1977. This proved a major inspiration for his work for the following two decades. The sculpture will sit near nine icons by Sergei Federov, which held a special significance for Sir John. From the late 1990’s he looked for inspiration from alternative sources for his broad interest in the great religions, embracing Hinduism, Judaism, Christianity, Islam and the spirituality of the American Indians. After a period of intense illness, he was also inspired by the works of Tolstoy, Shakespeare, the English poets and Dante. His most famous work is ‘The Protecting Veil’ written in 1988 which embodies his passion to express beauty and truth through music. He has always excoriated the dissonant and the needlessly complicated.

“Sir John Tavener’s ethereal, deeply spiritual music has the same sharp, refined essence that, in a different way, is akin to my sculpture. For years I have been moved so much by the sounds and invention of his work.” Angela Connor, 2016 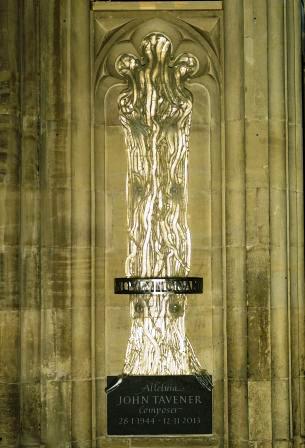 About the Artist
Angela Connor began her career with Dame Barbara Hepworth at St Ives in Cornwall and left to practise on her own before she turned 20. She has become particularly known for her mobile sculptures moving with water and tipping in the wind, playing with gravity, light and shadow, although she has also produced more conventional statues and portraiture – the 14 by her at Chatsworth include one of Roy Strong, a Herefordshire neighbour.

Making the sculpture
The sculpture was made at the National Glass Centre in Sunderland, where Angela worked with 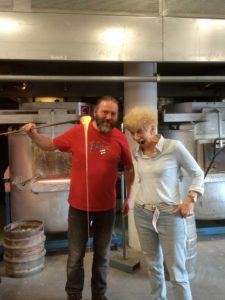 craftsman Stephen Beardsell who invented a way to achieve the effect of moulding flowing water in glass. First individual pieces of glass were melted in the furnace, then the technicians lengthened them into “straws” by moving the molten glass in the air. A pile of the “straws” were laid upon each other in a template the shape and size of the alcove in the Cathedral. This collection of individual glass strands was then slowly heated over many days, allowing the “straws” to melt together into a single form. Stephen’s expertise enabled the big, heavy memorial to emerge.

“With great care, Stephen drove the glass to Winchester Cathedral from Sunderland. We were on a tight schedule so I hired an excellent craftsman and builder, Graham Walls, to lift and install the work. The glass is thick and very heavy and there was no time to make another before the opening so there were some breathless moments as it was lifted into place, but a very quiet cheer emerged to the background of the choir practice.” Angela Connor, 2016

Find out more and apply for a Cottam grant