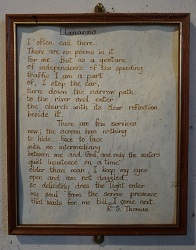 In August of this year St Anno’s, Llananno near Llandrindod Wells joined our collection. This little church is a 19th-century re-build by David Walker of Liverpool in 1877 on the site of a medieval predecessor. The chief glory is the magnificent medieval rood-screen. Pevsner calls it “among the finest pieces of medieval screenwork in Wales”.

It was carved c.1500 by the Newtown school of woodcarvers and is richly decorated with flora and fauna. The rood-loft above carries a long line of twenty-four canopied niches framing Biblical figures. These were carved by Boultons of Cheltenham c.1880 and are replacements of the originals. They include Christ in the centre, with the twelve apostles to his left and figures from the Old Testament to his right.

Walker’s reconstruction and restoration is sensitive, but it is regrettable that all trace of colour has been removed.

When Walker visited the church in the 1870s, he remarked:

It is to be deplored that this ancient church – an edifice possessing such interesting relics of the art wood-work of the period – should be permitted to fall into irretrievable ruin, and that its present sad state of neglect and decay should render imminent the destruction of the fine example of ecclesiastical woodwork it contains.

In Archaeologia Cambrensis, 1874, it was recorded: The church is a long low building, without any break to indicate a chancel, with a modern roof and bell turret mostly constructed out of old materials. One or two fragments of an earlier roof which remain, are similar in type to that at Llanbadarn Fynydd, but more simple in design. The porch, though now in a dreadfully dilapidated state, is a fine specimen of the ancient timber porch of the district. The spandrils of the arch have been sunk, and were doubtless filled with carved foliage or tracery. The timbers are very massive and are boldly moulded and chamfered.

While, upon a visit to the church in 1851, Sir Stephen Glynne described the fenestration as ‘wretched’, and recorded that the west end of the nave was in use as a school.

The dedication to St Anno is now unique in Wales as that formerly ascribed to the church at Newborough in Anglesey is no longer credited.

St Anno is shrouded is obscurity. It cannot be ascertained whether Anno was a man or a woman and there is no information as to the date of his – or her – life. All that can be said is that the Peniarth MS 187, and some 18th-century calendars, give the saint’s festival as 20th May.

We are currently scheduling the repairs but, in the meantime, this church is open daily.

It lies off the A483 but is easily missed tucked into its sunken churchyard. There is a large lay-by just beyond it where you can park – then follow the old-fashioned signs.  There is a feel of the Secret Garden about the entrance into the churchyard – you literally walk through a hedge and are then greeted by a curved wall lined with tiles on edge laid in good Arts and Crafts fashion that directs you towards the porch down a short avenue of trees.

We are proud to be the guardian of this church.