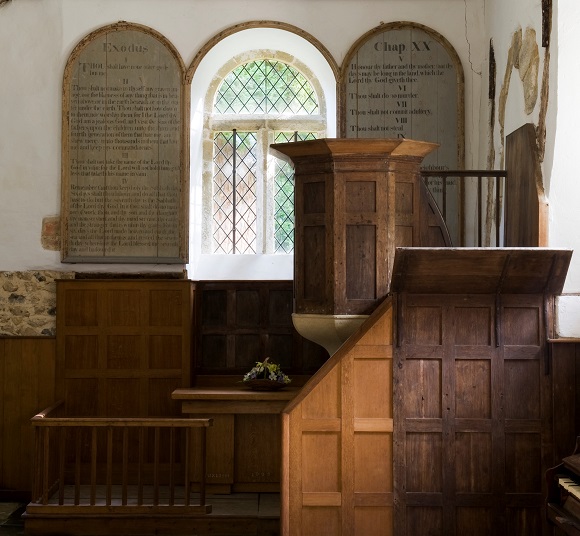 The first documentary evidence we have of this charming building is in a will dated 1532 when Isabel Colpece left “ii shepe to the Church of Tyklyth”. However the building is much earlier than that, a blocked 12th century window having been discovered during recent conservation work. This, together with ‘herringbone’ masonry in the north wall, points to a date within the Norman period (1066-1200).

It has been suggested that this building served as the original parish church of Trotton and was replaced by the present Trotton church early in the 14th century. If this is the case the chapel of Tuxlith certainly remained in use, as the Register begins in 1581, and the building itself shows signs of alteration.

In the 17th century a gallery was added, and although this was removed at a later date the stone stairs by which access was gained still remains outside. In the 18th century the most significant alteration – the addition of the north transept – was undertaken. However, with the arrival of the railway and a subsequent growth in population the old church was considered too small and mean, and a new one was built to the west of the old in 1879.

The old church then became a Sunday School room and continued as such for over fifty years. Sometime in the 1930’s it was closed up and fell into complete ruin. The roof fell in, rendering fell off the walls, and vegetation took hold. The building was eventually declared redundant in 1974 and at the instigation of Ivor Bulmer-Thomas the Society took the building into care and immediately made it weather-proof. A local Friends group was established and they have mounted an exhibition in the church, arranged concerts and gatherings there and been very successful in raising money and engendering interest. The pulpit was restored in 1993 whilst the altar, designed by Sir Hubert Bennett, is the latest addition to this much loved and now far from friendless church.

An essay on Tuxlith Chapel by Leslie Lloyd was published in the Ancient Monuments Society Transactions (TAMS), Volume 44, 2000.