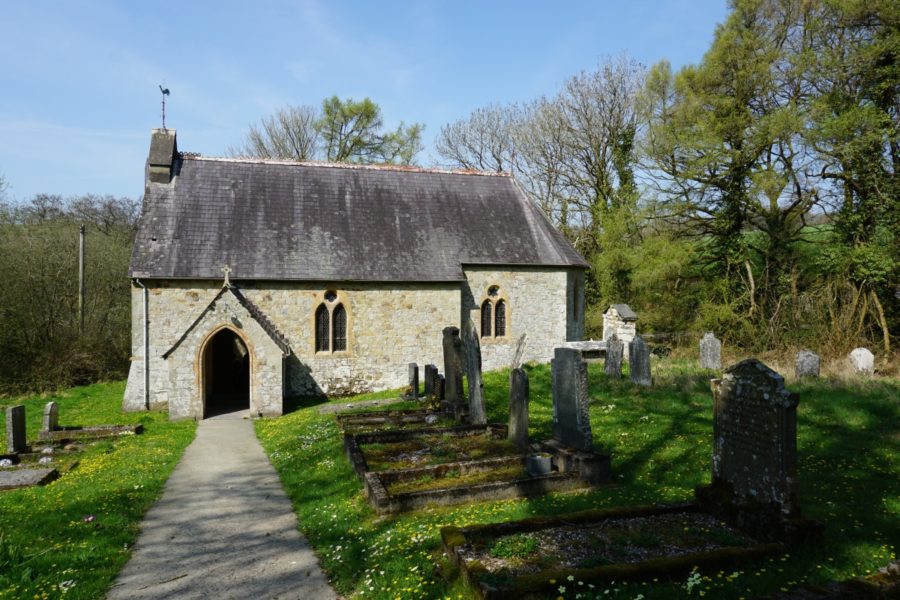 St Dogfael’s church, Meline is an exercise in High Victorian geometry with “minimal extraneous detail”. The church was built by Robert Jewell Withers in 1864 for Gothic romanticist Sir Thomas Davies Lloyd of Bronwydd. Withers (c.1823-94) of 51 Doughty Street, Holborn was a prolific architect and is perhaps best known for his work at St Mary’s, Bourne Street, Belgravia.

There was certainly an earlier church on the site of the present building, of which the blocked north doorway of the nave, with three grotesque headstops, and probably the wall in which it is set, is the sole survivor.

The present building comprises a nave and apsidal chancel (was Withers building here on the foundations of the original church?) under a single roof, a western bellcote sunk into the gable, a south porch and a north vestry. The chancel is stepped in, with taller eaves, but maintains the single ridge-line. The vestry chimney is described by the RCAHMW as ‘handsome’ – stepped in and topped with a hipped stone cap. The fenestration of nave and chancel is also worth noting; the tracery varied and giving the impression of having been punched through the stone, an effect brought about by the windows being set flush to emphasise the sheerness of the walls. By contrast, the west wall rises from a battered plinth.

The interior is light and airy, thanks in part to the lack of stained glass. The leading of the plain glass windows is a delight, with varied patterning, including an emblem of the Trinity, and Stars of Bethlehem in the splendid rose window in the west wall.

There is only one stained glass window, the lancet behind the altar, a Crucifixion with SS Mary and John, in vivid colours, but a rather cramped design, by Lavers & Barraud of 1865, i.e. contemporary with Withers’ rebuilding of the church.

All the furnishings seem to be as Withers left them; pine pews, with shaped ends, a pulpit with vessica-shaped panels, stalls, communion rails, lectern and communion table. Withers paid particular attention to the sanctuary, where the reredos is of painted ashlar, with inset best quality five-colour tiled panels, which, along with the window, enliven an otherwise austere interior.  The church is devoid of memorials; any there might have been in the earlier church have not survived. The octagonal ashlar font is also by Withers, though at some subsequent date seems to have been (inappropriately) painted a rather sludgy grey.

The vestry, to the north of the chancel, contains a diagonally set fireplace and aumbry. On one wall hangs a plan of the new church, for the ICBS, as well as a standard ICBS board recording a grant of £75, on condition that the 77 seats ‘at the least’ were free.

The church contains a SPCK Welsh Bible (1858), Book of Common Prayer, and an Illustrated Welsh Bible, with commentary by Owen Jones. Together they are indicative that, when the church was rebuilt, Welsh was the language used for public worship.