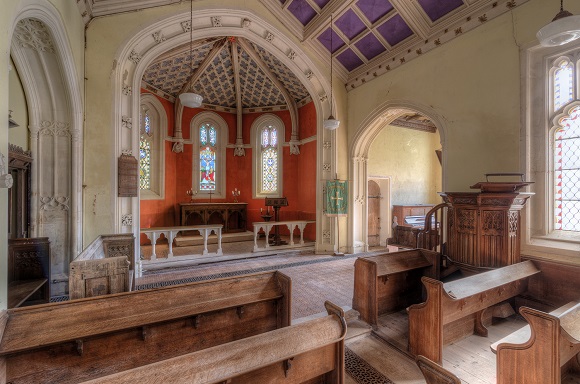 St Mary’s is both peculiar and picturesque. Set in to the chalkland of the Cranborne Chase, the design combines a late medieval tower with a nave, transept and apse built in stages between 1852 and 1875. Nikolaus Pevsner described St Mary’s as ‘… a Georgian space in Perpendicular form, long, uniform, well-lit – it might be a schoolroom.’

Other highlights include survivals from the earlier church, the late medieval font, the tiny monumental brass in the sanctuary, 1360, and the oldest in the county and the flattened Gothic niche on the exterior north face of the tower.

The most playful presence is the Noah’s Ark set in the niche on the north wall, complete with animals peeping through windows. The glass in the west window shows the Emblems of the Passion, those associated with the trial and crucifixion of Christ, including the nails, the ladder and the sponge dipped in vinegar.

The church is intertwined with the Crichel Down Affair, the Bloomsbury Group and the gay rights movement in the 1960. Click here to read more about these connections in our blog.