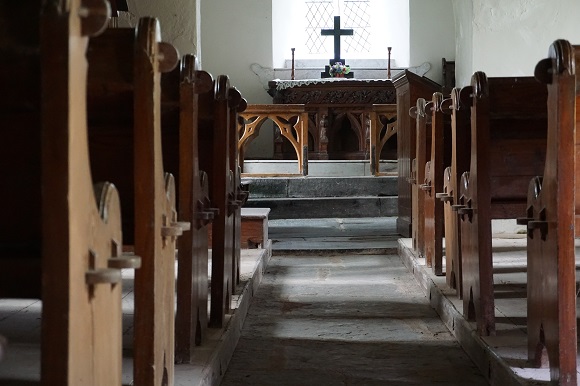 The church of St Odoceus lies in a dell reached through the grounds of The Old Rectory.   It dates from the 13th century, and was remodelled in the late 14th by the Lord Marcher of Laugharne, Sir Guy de Bryan.

We rescued it in 2006 from a state of dereliction and we have still to tackle the “heave” in the floor of the chancel.

Inside the church is a 14th century effigy of St Margaret Marloes, found in the churchyard in 1902, broken into 3 pieces.  St Margaret is shown in tightly folded clothes and a wimple typical of the time.  The story of her unusual sacred life is told by Friends Trustee John Morgan Guy here.  But what’s expecially rare about this effigy is that it appears to be a representation of a ‘hear

St Odoceus also retains an elaborately carved oak altar of 1882 by local stonemason Owen Williams.  Study it carefully and you will find his inclusion of vine-wrapped tracery, a lamb carrying the shepherd’s crook, doves bearing olive branches, carved angels and an assortment of flowers –  lily of the valley, rose of sharon and a passion flower.

The 1882 Restoration and Fundraising Bazaar

The restoration of the church in 1882 was paid for in part from the proceeds of a grand bazaar and garden fete held by Mrs Wienholt in the grounds of Corse House.  She had taken it upon herslf to rescue the church, which then ‘resembled a barn more than a House of God’, and succeeded in spurring on much local support.  On 5th May 1882 the Carmarthen Journal reported that at the bazaar, Mrs Norton of Laugharne Castle had sold ‘artworks, terracotta, medallions of stuffed birds, antique mirrors and a beautiful model of a ship fully rigged…’, Mrs Vaughan of Laugharne at stall no 6 offered a 3 foot high-doll and a very handsome screen based on lily of the valley and Mrs Falkener of Glanymor donated a series of books on the history of Grecian sculpture and the Psalms of David.  And it must have been a relief after all to get to the stall which offered regular supplies of the ‘cup which cheers’.

We continue to be indebted to local people for supporting the church.