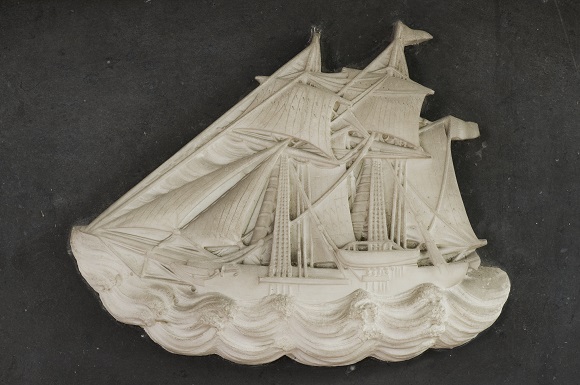 St Mary’s Hardmead is listed Grade I and was taken into care by the Friends in 1982 after the church authorities had proposed converting it into a house. The medieval village has long since disappeared although deep ploughing operations in 1973 revealed lost earthworks.

The west tower is 13th century, the chancel slightly later, whilst the south porch, top stage of the tower and clerestory are 15th century. The font is medieval and carved in clunch (hard chalk) and there is a pretty Georgian organ.

The church contains an interesting group of monuments to members of the Catesby family. The most important is to Francis Catesby who died in 1636. He was obviously a bibliophile as he is shown lying on a pile on books! Another pictorial representation is of the sailing ship “Nancy Dawson” on the memorial to Robert Shedden who died in 1849 searching the Arctic for the lost expedition of Sir John Franklin.

There are also some interesting fragments of fourteenth century stained glass which have recently been restored by the Friends.

The locally-based “Friends of Hardmead Church” manage the church on our behalf and have proved themselves indispensable.